It is perfectly known what a shrug is. It is a gesture that represents indifference or not knowing something. Being this a very common expression, it is needed when texting. Hence the shrug emoji.

This is a Unicode gesture, meaning that it only requires the usual characters in most keyboards. Typing it while texting is easier than it seems. This article will take into everything related to this emoji, its history, and some other interesting facts.

A Little History On Our Shrugging Emoji 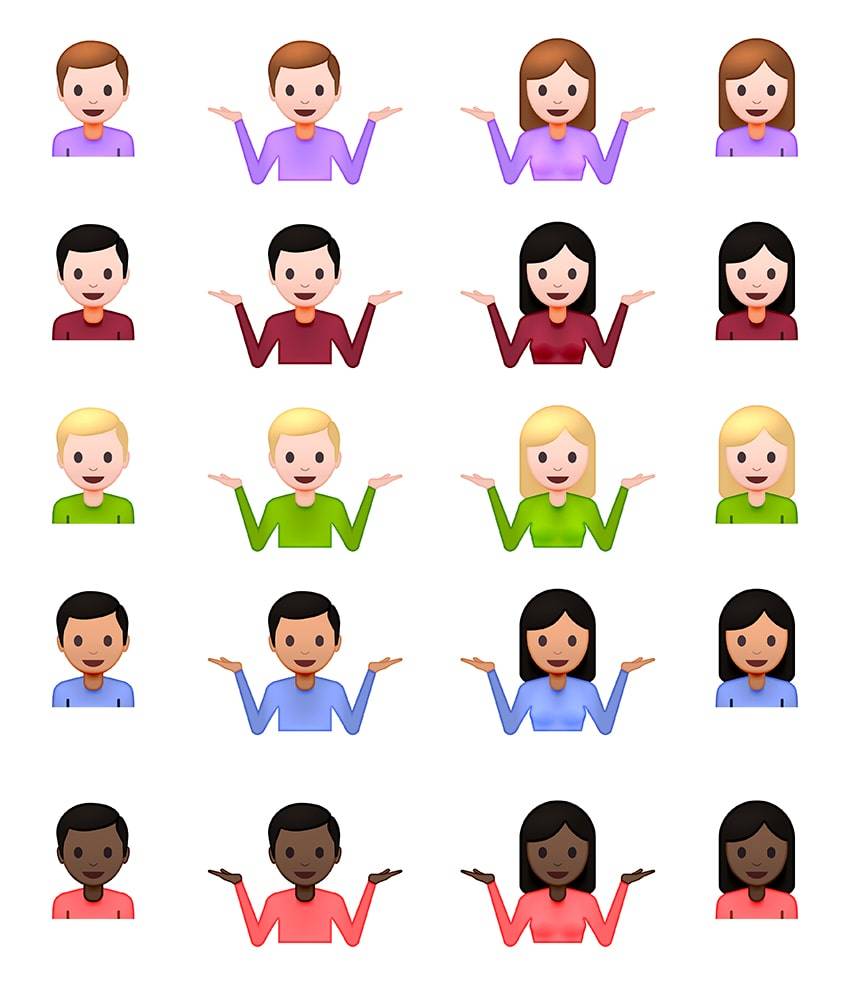 As with everything that is born on the Internet, thanks to one defining moment this new emoji of a shrug came to be, and then people just made it viral. However, this one did not start in English. In fact, it is what in Japan is known as a “kaomoji” or “face mark”. It incorporates characters from the katana alphabet, so perhaps it is not the typical emoji represented with underscores, slashes, and dashes.

Also known as “shruggie” or “smug shrug”, it did not become popular, but when Kanye West made that unforgettable and infamous shot-down to Taylor Swift in favor of Beyoncé back in the 2010 Video Music Awards. During his dissing interruption, he shrugged his shoulders and stretched his arms out. This is a representation of his unbelief on what was going on.

Rap crew Travis Porter tweeted this expression, and that helped it become viral. Sooner than later, players of StarCraft 2 turned it into a victory symbol. Except they would use it under the name “sup son”. It was 2011, and the emoticon was parodied in YouTube videos, the expression has been used by humans for ages, it only stands and the expression was found in some films such as Star Wars and Spiderman.

In 2020, it still boasts popularity among those who use it in their blog, send it to a contact, or all across their social media channels.

The truth is that nobody knows for sure when this shoulder shrug emoji first started. But since humans have been used the expression for ages, it only stands to reason that people want to use it as a new emoticon.

The easiest way to type this ubiquitous and pervasive emoji is to copy/paste it. For those who will use it a lot, perhaps it is not too practical to copy every time. Most computer systems and cell phones allow a text replacement shortcut in their autocorrect function.

This is the easiest way to go. It is only about copying the emoticon from any source, like the one mentioned above, and paste it wherever it is needed. It works for both mobile and computers as well.

The one mishap with this method is that the source will always be needed every time. This makes it quite impractical, especially if the shrug text emoji is to be used a lot – not a problem for the occasional user.

That sometimes annoying autocorrect function can come in handy. Across all devices, this function can be customized in such a way that every time a word is typed, it autocorrects into the emoticon.

Unfortunately, MS Windows does not offer an autocorrect function. Instead, PhraseExpress or any other similar app to create text replacement shortcuts. This will easily get the job done.

4. On an Android Device

To set up the autocorrect function on an Android just follow these steps:

When typing the word to be replaced, make sure it is a familiar word easy to remember.

The principle to make the emoji emoticon work on a Mac is very similar to the steps for an iPhone, which will be discussed further.

6. Typing it on an iPhone

Apple’s cloud service syncs both a Mac and an iPhone. Meaning that if the job was already done in a Mac, it should sync to the iPhone.

But, If the Iphone Is All There Is, These Are the Steps:

There are other ways to easily type in the emoticon. Downloading a dedicated app is also an option. This one works wonders when you need to easily send it through Facebook, Twitter, or Instagram.

Some apps are pretty dedicated. There is one for the iPhone named: shrug and is a keyboard that only does that: place the ¯\_(ツ)_/¯. That is all it does; nothing else.

When using external apps, there is always a risk. The best way is to apply the autocorrect functions explained above. Another method is to use the original Japanese Kana keyboard, but this option seems above the roof.

What Does the Shrug Emoji Mean?

As stated throughout this text, the emoji is a Unicode text that shows unknowingness or some incredulity. It is used all across social media to express not knowing what to do or how to react. It was popularized by American media in 2010.

This is the smirking face, and it represents essentially that. This emoji is usually used to describe something sexual. More specifically, when someone is trying to hook up with another.

It can also be used in a lighter context to represent malicious joy, guilty pleasures, or coolness.

What Does 💦 Emoji Mean?

A simple observation allows one to tell those are three blue drops being thrown at something. It can be interpreted as sexual fluids. More casually, they could represent sweat or water in a non-sexual tone.

What Does the Poop Emoji Really Mean?

Known as the pile of poo, the poop emoji is still gorgeous despite representing what it does. Although its original meaning might be to represent chocolate ice-cream, the truth is that the internet has given it its vicious meaning.

To Top It All Off

Some final thoughts regarding this fascinating little guy include the fact that it has become a popular standard. In every text and messages, it is not uncommon to find it.

Despite being impossible to replicate with a Western keyboard, its popularity has risen on this side of the world.

Not being able to type it directly is not getting on the way of those avid users that feel the need to place it everywhere they virtually go.